I don’t understand why USA keeps teasing Canada. What’s wrong with Canada? They produced some great cartoons. Namely Stickin’ Around.

for your big fat information
this is our imagination
me and my friend bradley
what you know is what you see
stick around, and help us to explore
see the world, like you’ve never seen before

we get up, we get down
sometimes we just clown around
what we make is what we feel
bradley: yeah like aliens from uranus
BRADLEY GET REAL!!

stick around, theres a whole world to explore
sights and sounds
you aint never seen or heard before
sing it loud
all you have to do is stick around

I swear, this is the last cartoon post for a long time. I need to talk about other things. Stickin’ Around is famous for its kid like drawing (stick figures) and it’s crazy imagination. There is so much imagination, that you never know what’s actually real and what isn’t. If you are still a kid you wouldn’t have a problem with it. I don’t ever remember having this problem when I watched it. I guess I didn’t think about it. What’s real and what isn’t is kind of frustrating.

Pilot: And Action – First Episode. Bradly is making a movie for a Video competition, kind of like America’s Funniest Home Videos, except the videos I think are just supposed to be dumb. Take a look at these pictures to see how it all went. They get lost in the end and try to find their way back home. 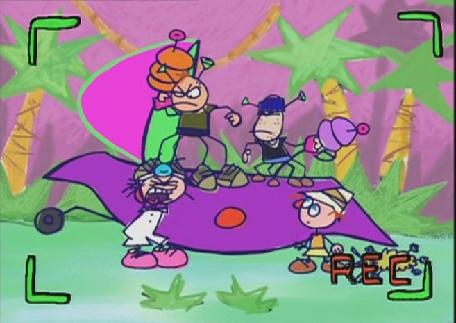 Night of the Living Dumpster – Stacey’s Wiener dog is just drooling at the TV which isn’t even working. Stacey’s mom tells her to take out the trash. Bradley and Stacey must fight off the scary Dumpster Monster who is trying to eat them.

Disappearing Act – Stacey’s mom gets mad at her daughter because she keeps asking ‘why’. She yells at her to clean up her room. Bradley comes over to help and they play around with her mothers vanishing cream. They disappear and go around the neighborhood to do their deeds of the day. her mother finds her room spotless and gets really worried. Where is Stacey and Bradley?

And The Wiener Is…- This is the first appearance of Dill (the loud guy) and the girl in the wheelchair. It’s Wednesday so the gang buy a Lott A Bucks ticket. Russel and Lance chase after them for their ticket and they do everything they can do save it from them. Why don’t Russel and Lance just buy their own? Oh right, because it’s more fun to steal.

Beware the Lunchwad – It’s the first day of school and what’s the biggest issue in school? Lunch. First Bradley forces Stacey to pick which to eat between a Skunk and an eyeball, then their sports teacher talks about the digestive system of the frog. Russel kicks his lunch around in class before eating it. His lunch looks like vomit which turns into a monster and chases after the gang. In the end it was all their imagination. Russel opens his vomit looking lunch (what is it B-man?) and gulps in it. Gross. No wonder he smells.

Madam Know-It-All – There’s nothing on TV. Bradley and Stacey see a psychic work her stuff on television so Stacey declares that she is psychic. She goes around predicting things that come true in a way.

That’s all from this volume. Buy the DVD. I’m tired. Next volume coming up. Until next time! Holy Mackeral! Geez Louis!

3 thoughts on “What’s that Funky Smell? – Stickin Around Volume 1 DVD”